Preparing for any competitive exam is not easy.

The preparatory phase involves a lot of stress.....Let's help you out a bit here.

The best thing you can ask for is a Solved Nata Paper, that too including the drawing portion.

There is a reason why we chose Nata Question Paper from the year 2017 - This was the year when the exam pattern went for a major overhaul and trust us, the drawing questions were the most difficult that have ever been asked in the exam.

Keeping the difficulty level in mind, we chose this paper.

Plus solving previous year question papers will help you get a good score in Nata exam.

So, here is a free treat for you:

Q1. One late afternoon, you along with your family members were enjoying a boat ride along a river and viewed a spectacular sunset. You noticed that the boat was moving from south to north and all of you were facing north. Suddenly, your youngest brother shouted and told everybody to see the river bank on your right side. You saw a series of high-rise apartment building interspersed with trees. But, in the middle, there was a beatiful river ghat, a garden and a small white mosque adjacent to it. Lots of birds were flying around and sitting on its golden dome. In the concrete jungle, the small structure seemed to be a nice relief. Develop a coloured sketch (use dry colour) of what you experienced. 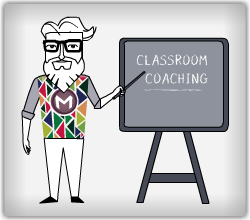 Before attempting this question it is advisable, to draw a rough sketch from the information provided to us. This helps in providing a clear picture to us & prevents from making mistake in the final drawing. Putting down the information on paper also ensures that you don't miss out on anything while drawing the perspective. 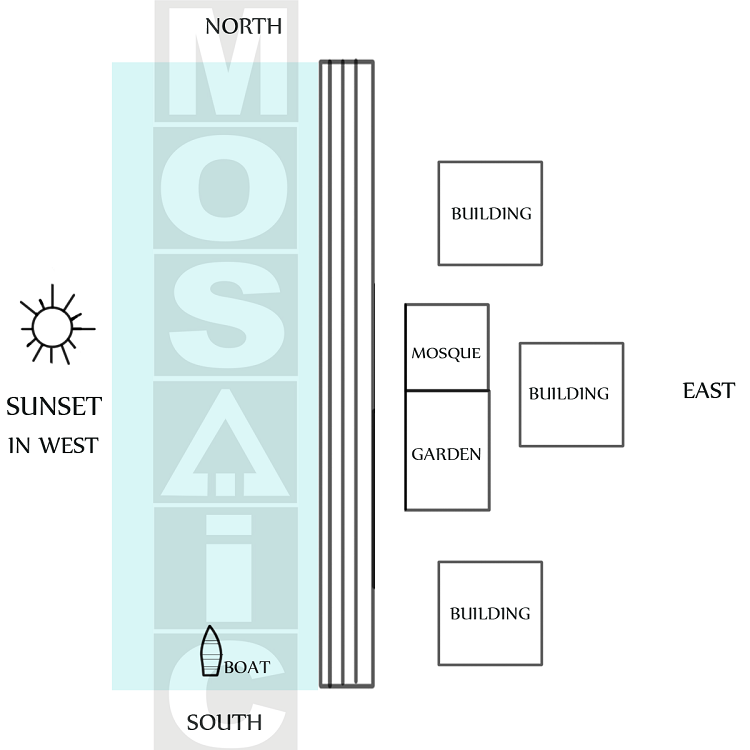 It is important to note that, though the sunset is mentioned in the initial lines, it will not be apparantly visible, as the main emphasis is on the ghat & the monuments on the west ie. right hand side. The reflection of the sunset will be visible in the river waters & the mosque dome. 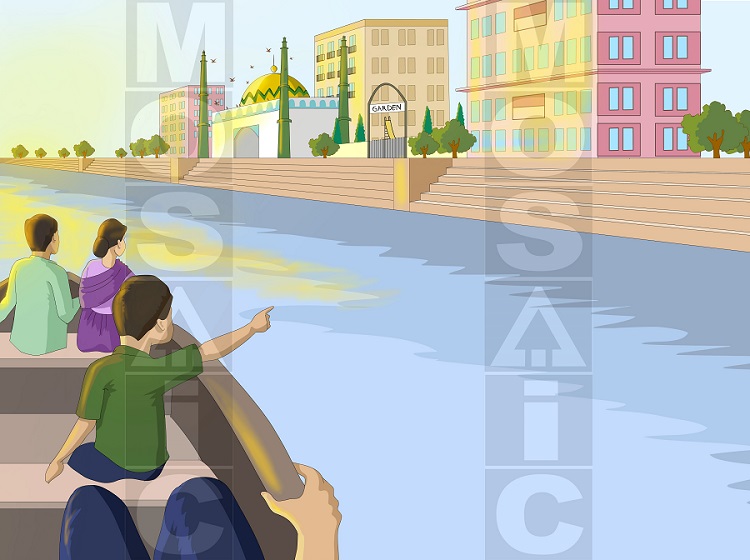 Q2. You are waiting in a railway platform for catching a local train. Some people are also waiting there with small and big luggage. Few people are sitting on wooden benches. There is a small food shop. You saw that the roof above is sloped. Standing at the entry point of the platform you noticed that the train is coming and has reached almost midway of the length of the platform. Draw a pencil sketch of what you experienced. 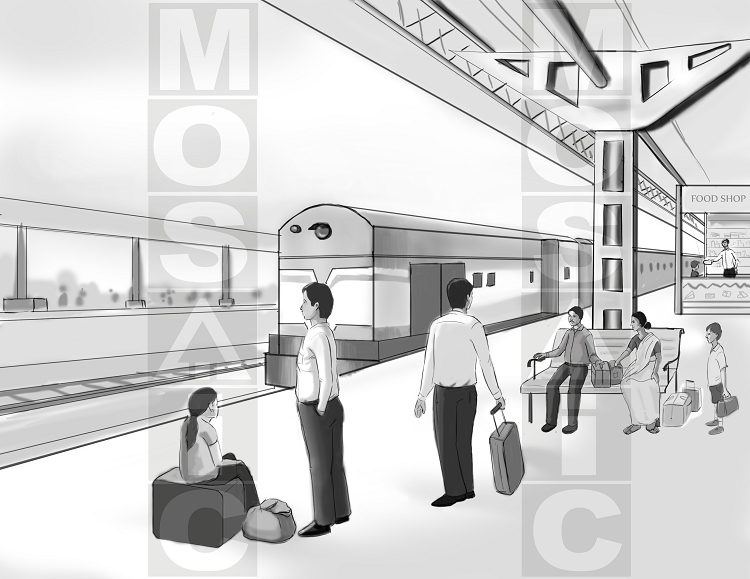 * There was no correct answer provided in the booklet for Question No. 15 (Set-D). As decided by the competent authority of CoA, full marks is to be awarded for the said question to all candidates, irrespective of attempt for the same.

EXPLANATION: To get the number of bricks used in the wall, we need

The volume of brick wall / Volume of a single brick

Lets convert the dimensions of the brick wall also in cm

So, we need 4860 bricks in total to build the wall of the given dimensions.

Q2. From a point O, two persons A and B started their journey on XY plane. A went 7 km along north and stopped. B went 5 km west and then 5 km south and stopped. What is the shortest distance between A and B?

To find the shortest distance, AB 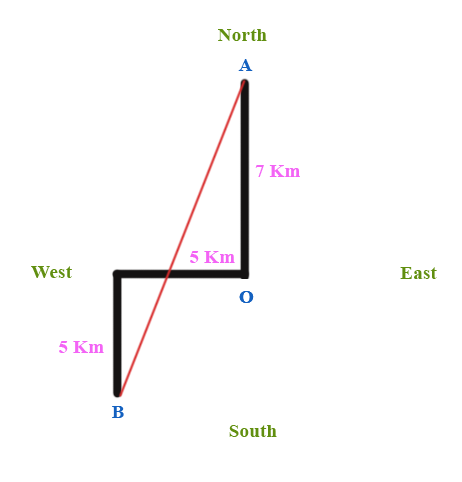 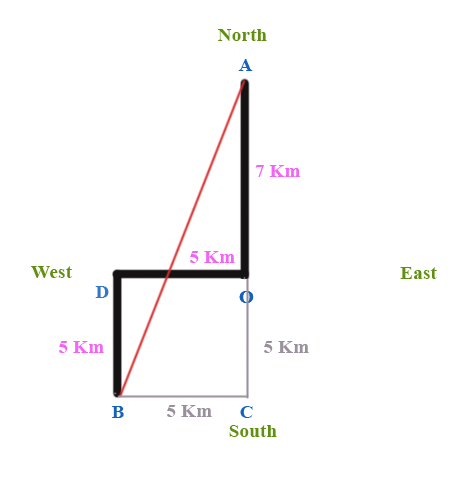 Q3. Green Architecture is promoted these days because

(A) it costs less initially

(B) it is environment friendly

Q4. The type of roof suitable in plains where rainfall is meagre and temperature is high is

(A) pitched and slope

Q5. Which one of the following consumes least amount of electricity?

LED's are power efficient, since they produce more light and less heat in comparison to incandescent & other conventional light bulbs.

Q21. A direction post is erected on a crossing. Due to heavy storm it turned in such a way that the arrow which was first showing South is now showing East. A car went in a direction thinking it is West direction is the car actually moving?

Q22. Let E and F be any two sets. Which of the following statements is NOT correct?

Q23. A set P has 20 elements. The number of subsets of P containing odd number of elements id

(B)          is neither reflexive nor symmetric but transitive

(C)          is neither transitive nor symmetric but reflexive

Q27. From a point O, two persons A and B started their journey on XY plane. A went 7 km along north and stopped. B went 5 km west and then 5 km south and stopped. What is the shortest distance between A and B?

Q28. Three cubes of side 2 cm are glued surface to surface horizontally such that it produces a cuboid. What is the surface area of the cuboid? 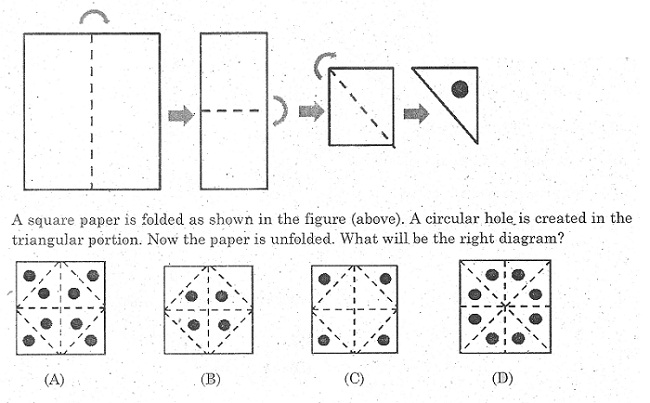 Q30. How many total number of triangles are there in the figure given below? 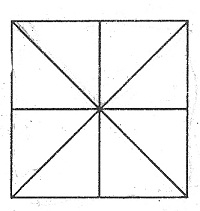 Q31. The left most figure below show the top view of an object. Identify the correct elevation from amongst the answer figures, looking in the direction of arrow.

Q32. Which one of the following consumes least amount of electricity?

Q33. Green Architecture is promoted these days because

Q35. Find the odd one from  the figures below. Ignore the direction of arrow head.

Q37. Which of the following is a scalar quantity?

Q38. A heavy ladder resting in the floor and against a vertical wall may not be in equilibrium if

Q39. The type of roof suitable in plains where rainfall is meager and temperature is high is

Q40. The angle which an inclined plane makes with the horizontal when a body placed on it is about to slide down is known as angle of

Q42. Unscramble and find the odd one among the following

Q44. In a group of four children, Som is younger to Riaz, Shiv is elder to Ansu, Ansu is youngest in the group. Which of the following statements is/are required to find the eldest child in the group?

Q45. Given below are two statements followed by two conclusions, Assuming these statements to be true, decide which one logically follows.

Q47. A circle is inscribed within an equilateral triangle of area √3 sqm. The circumference of the circle is

Q49. When a clock is seen through a mirror, the hour arm and minute arm are seen at 9 and 4 respectively, so that the time seen is 9 : 20 What will be the actual time after 15 minuts?.

Q50. Length of a solid diagonal of a cube is 6 cm. The volume of the cube is

Q51. How many surfaces are there in the model ? Consider all seen and unseen surfaces. 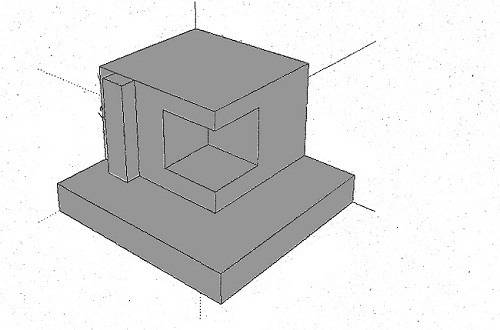 Q52. A horizontal supporting crosspies over an opening is called.

Q53. A square is drawn on 1st quadrant of XY plane having consecutive coordinates (counter-clockwise, starting from left botton) as P(2, 3), Q(7, 3),  R(7, 8), S(2, 8) respectively. Thereafter, each side of the sqare is doubled considering P as a fixed point and the new square becomes PQ’R’S’ . Now this new square is mirrored with respect to X axis. What will be the coordinates for the images of R’?

Q54. What secondary colour is obtained by mixing blue and Red colours?

Q57. Choose the appropriate shadow pattern of this cube (below) at 3:00 p.m in India. 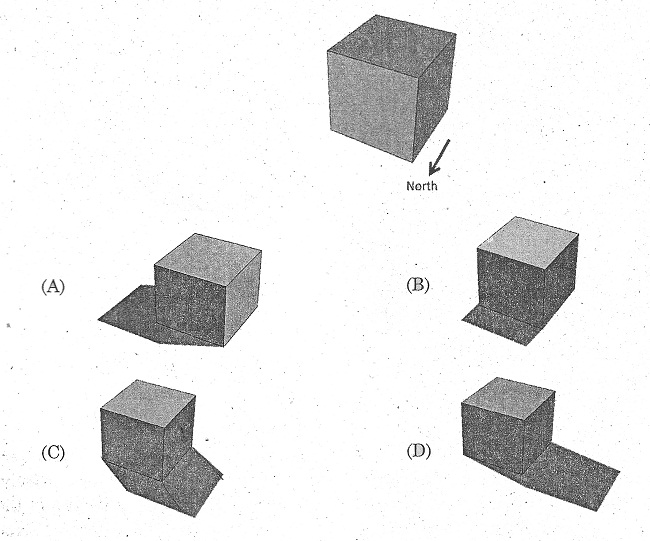 Q58. Fly ash is a waste product from which of the following:

Q59. French influence in architecture is found at 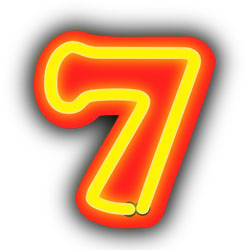 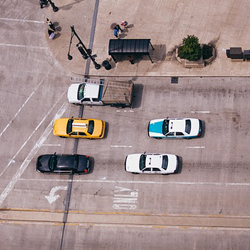 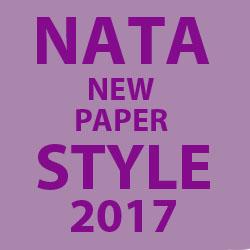 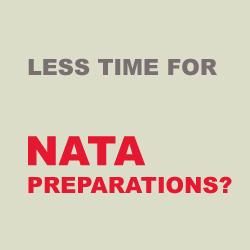 Less Time Left For Nata 2017 Preparations? What to do?